Share a memory
Obituary & Services
Tribute Wall
Read more about the life story of Suzanne and share your memory.

Suzanne Chaille Payne passed away January 17, 2023 at the age of 78 in Orlando, FL after a short struggle with complications from Congestive Heart Failure. She passed peacefully surrounded by loved ones. She was predeceased by her parents, William (Jack) and Marion Chaille, and brother Billy Chaille; her parents in-law Edwin and Mary Payne; step mother in-law Mary Sweedyk Payne; nephew Matthew Eardley; and step sister Kathy Dozema. She is survived by her high school sweetheart Dr. Robert Payne. They would be celebrating 56 years of marriage on June 23, 2023. Together they raised four wonderful children, Thomas (Merielle), Joseph (Andrea), Robert (Megan), and Lindsay (Kory) Garbelman. She is also survived by her beautiful grandchildren; Samuel, Chaille, Landon and Wesley Payne; Sophia and Lucy Garbelman; along with step grandchildren Alex, Zoe, Kailie, and McKenna. She leaves behind an extended family of brothers and sisters in-law, and nieces and nephews, all of which were dear to her heart.

Sue was passionate about education and earned her Bachelor of Education Degree from National College of Education in Evanston IL in 1966. She began her teaching career in the Kentwood MI elementary school system. She continued her teaching at Roosevelt Elementary in West Allis, WI when Bob was accepted into dental school in Milwaukee in 1967. In 1969, she put her teaching career on hold when she and Bob started their family. She resumed teaching in the 1980’s in the Forest Hills School System in Grand Rapids. She worked as an aide with her close friend Julie Goebel in the Resource Room teaching special needs children. When her teaching career ended, she continued to work with Julie as a volunteer. They made a great team for over twenty years. As a previous school administrator said, “her legacy will long be felt by so many families whose lives she impacted in such a great way. Even after she officially retired, she was such a tireless volunteer and had so many great friendships among staff members.” She was voted Volunteer of the Year in 2012 in the Forest Hills School System.

Sue is also survived by her wonderful group of friends, too numerous to mention. She enjoyed being with them at book clubs, Tuesday night dinners, playing games, and just being there for each other to hear the latest news. She loved being with her friends and was someone you could count on to listen to your concerns or problems and give compassionate advice. She truly was concerned about others “news”, then talking about herself. She also leaves behind her close friend and caretaker for many years, Lori Vereecken.

Her world revolved around her family. Nothing gave her more joy than spending time with her husband, children and grandchildren. She loved attending her children’s and grandchildren’s different social and school events.  She was an enthusiastic supporter, sometimes “too enthusiastic” at their different sporting events. She always cheered positively no matter the outcome. “Mema” was an extremely loving grandmother, and cherished the times she could be with her grandchildren, watching their activities and playing different games with them. She loved them “to the moon and back”.

Sue and Bob started dating as juniors at East Grand Rapids High School in 1961. So many memories: fishing the Little Manistee River, Indian Club, skiing in Aspen, military life in Panama, hiking the Tucson mountains, friends in San Antonio, TX, raising our beautiful family. They loved traveling the US visiting historic sites and national parks. In retirement, Deland, Florida became their second home and they enjoyed going on different Florida adventures and riding in golf cart with Bob golfing.
As per her wishes, Sue has been cremated. A Celebration of Life will take place at the Metcalf & Jonkhoff Funeral Home, 4291 Cascade Rd SE, on March 3, 2023, starting at 3:00 PM with a remembrance service at 4:00 PM 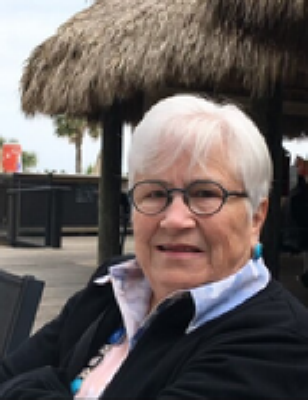